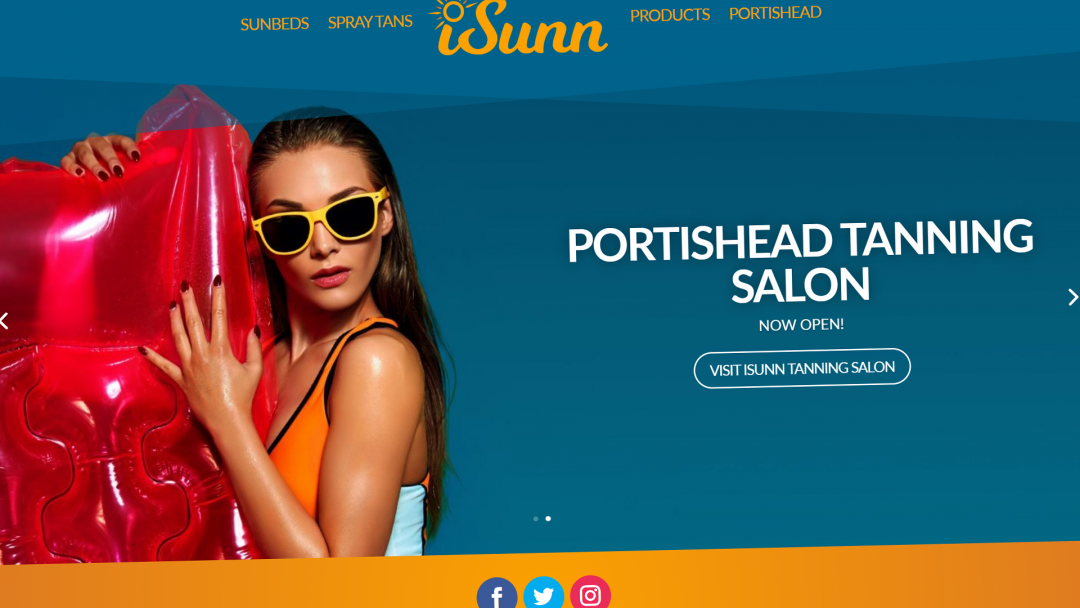 Over the past few months, we’ve been busy helping Kevin and Elizabeth launch iSunn Tanning Salon in Portishead.

When they approached us back in September, they came to us with the name and a very clear mission statement about what the tanning salon should be and how their customers should feel.

We set to work on designing the logo for iSunn. We set out to create a logo that would work well in their Portishead tanning studio, but also a logo that could scale with the business as they expand in the future to additional locations.

The final logo, when viewed by itself without the tagline, had to say tanning salon, without appearing tacky or obvious. It had to be something that would be instantly recognisable as iSunn grows as a brand.

The Chaos Created team created the branding book, including the colour palette, iconography, typeface directions, and image guidelines for the salon to ensure that the branding was complimentary to Kevin and Elizabeth’s vision.

We worked on two variations of the logo that inverts two orange tones – one bright orange, and one burnt orange – which can be used against light and dark backgrounds and imagery. The other colours in the palette were selected to invoke the beach and convey the relaxing, clean and professional atmosphere of the salon itself.

As part of Chaos Created’s branding offering, we went on to design the signage for the salon and the internal artwork, working with a local signage company who fabricated the signs. We also helped Kevin and Elizabeth visualise the interior design for the salon, using the style set out in the branding book to maintain the consistency between the digital and the physical components of the brand. We also produced the digital signage for the screen – an eye-catching addition to the salon, and a wonderful marketing tool too.

As we approached the launch, we went on to develop and design the eye-catching iSunn Tanning Salon website, making heavy use of aspirational imagery and the bold colours from our palette. The site had to be simple to navigate, and we’ve begun growing out the content with tips and useful information too.

Despite the site only launching in late November, iSunn Tanning Salon is now the top-ranked search for tanning salons in Portishead, and we’ve helped grow their social media channels and engagements.

It’s been a real pleasure working with Kevin, Elizabeth and the iSunn Tanning Salon team, and we look forward to continuing our work with them next year.

You can visit the iSunn Tanning Salon website at http://isunntanning.co.uk/.