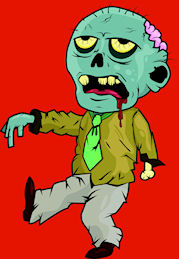 Chaos Created, the peculiar minds behind Timedancer, have began work on their next Windows Phone 7 app, Zombies Ate My City, due for release in December.

Zombies Ate My City is a forthcoming location based game, allowing users to defend their own city from an onslaught of zombies using real life locations.  Players complete missions, gather weapons and collect extra points in hidden locations around their own cities and towns.

We’ll be shooting the video elements for the app over three days from 22nd-24th October, in London.  We would love for some Windows Phone fans to come down and star in the app!  We’ll be shooing a few humorous scenes around the Isle of Dogs on the Saturday (22nd).

We’d need you to come along already dressed as a zombie (ripped clothes, pale faces, crazy hair…) ready to take part in a few short videos from 11am – 2pm.  We’ll give you a credit in the app too, just in case your friends and family don’t recognise you!  We’ll also reward the best zombie-like outfit with 4200 Microsoft Points for you to spend on Zune or on Xbox Live and we may have a few other things to give away.

If you’re interested, please fill out the Zombie Application Form and we’ll be in touch with the final details in the next few days.  If we get a large number of zombies apply, we’ll make a selection with varying ages and genders (just so we don’t terrify the locals too much).