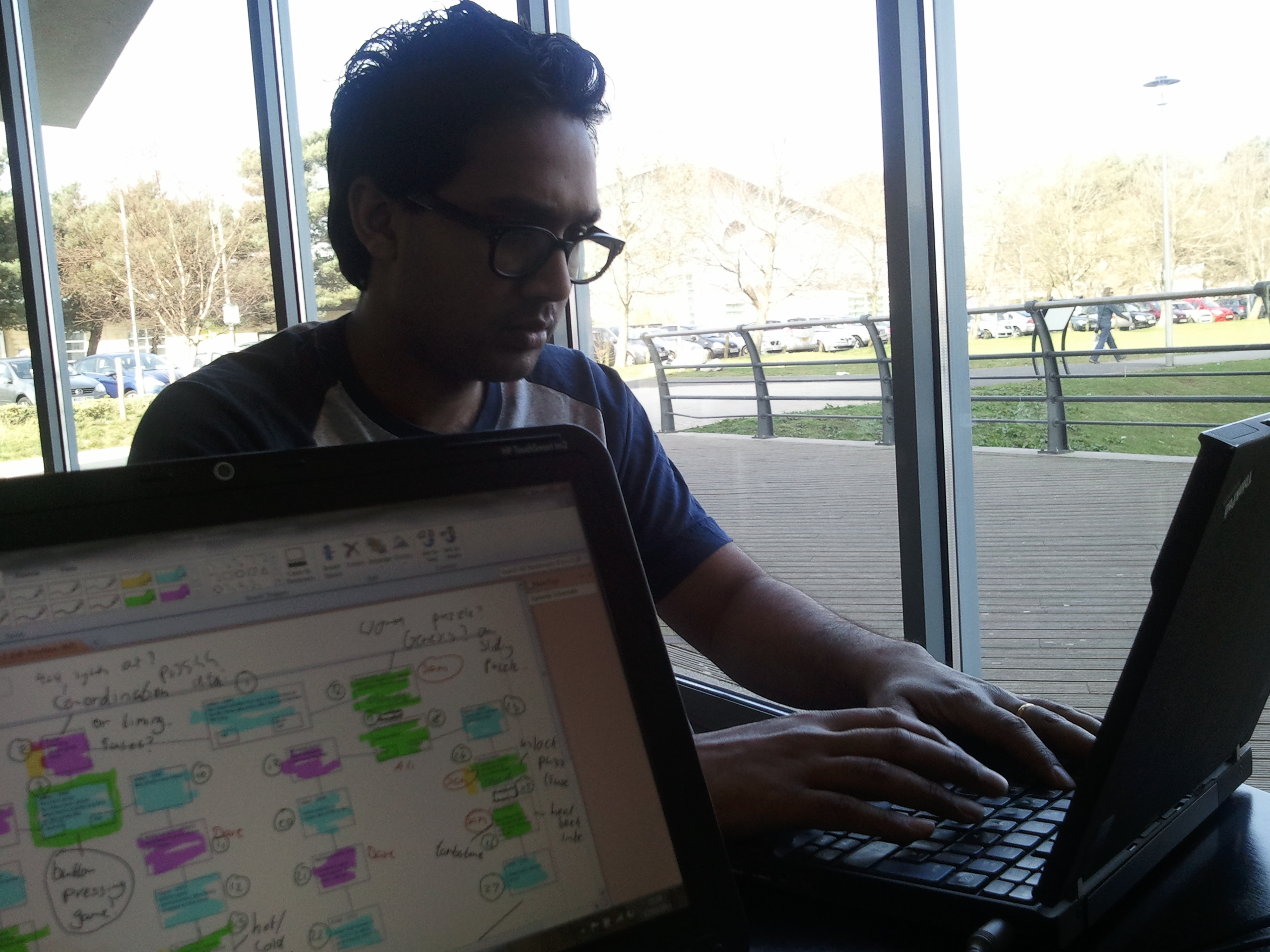 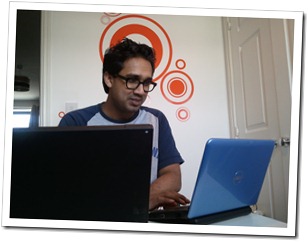 This week, Arivind Abraham (on the right, looking all 2011 with multiple computers) has been down and we’ve been working together.  It’s a different experience for us from Episode 1.  With the first episode, myself and Arivind did almost everything ourselves, and the project was drawn out over more than six months as we shifted focus, shifted platforms (twice!) and grew the story…  This time around, we’ve got a full crew and everything seems to be ticking along nicely, so we’ve been able to spend the time working on the important stuff.

So this week, I’ve been working on the puzzles.  We’ve now got three puzzles close to completion.  One’s a tile puzzle (which is really good), there’s a slider puzzle and a heat-seeking puzzle too (which might become my favourite… I think we’ll be using the mechanics from this in other areas).  They’re all shaping up nicely.  I’ve actually been prototyping these up in Flash.  This has allowed me to work out the “engines” for the games – the mechanics – whilst Arivind has been able to work out the actual puzzles that these engines will run, testing them for bugs, glitches, and then making sure the difficulty is suitable.

We’ve also sorted out the boring stuff – budgets, invoices and receipts….  That’s never fun, but we’re on top of it all now.  Although Episode 2 has cost considerably more than Episode 1 (mostly equipment, sets and a much larger crew) it still surprises us just how much we have achieved on such a budget… The results have been amazing from the video cuts we’ve seen.  Genuinely, this stuff looks like it’s been shot on film, it’s really nice.

Also, our 3D artists are all in place (there’s four of them!), briefed on designs, and they’re working away on having the environments and objects rendered ready to be dropped in to the app… The coding around this is mostly done already.

And finally, our composer has began work on the score.

So, this week has mostly been about organising and finalising the puzzles.  We’re so excited about launching this thing now, and we’ll be there – at Comic Con – showing it off.  We also will have some goodies to give away too (Timedancer swag!), so come along and see us…  And please, bring us coffee, we’ll be exhausted!

In the meantime, Arivind is flying off tomorrow, so we’ll be adjusting the way we work slightly.  He’ll be project managing for the final three weeks whilst I concentrate on coding.

And, and as a side note, we’ve literally just started brain-storming our next project.  It’s something a bit more social, and we’re excited about doing something between this and Episode Three.

Random stats from this week…

Games played: Yoostar 2: In The Movies

Listening to: The Social Network Soundtrack