This isn’t exactly Chaos Created news, it’s more personal, but I’m posting this here mainly due to the fact that without this man, Chaos Created would never have been created in the first place.

Chaos Created was born as “Chaos Games” right back in the early 2000s as a collaboration between myself, Alastair Maggs, and a school friend of mine Rich Hanbury.  For a couple of years, prior to this, I’d gotten into programming in a language called CAOS on a computer game called Creatures. 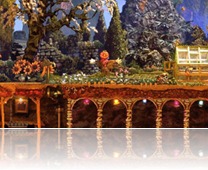 Creatures was an artificial life computer game series, created in the mid-1990s by English computer scientist Steve Grand. In the game, your goal was to raise little furry creatures known as Norns, teaching them to survive, helping them explore their world, defending them against other species, and breeding them. Creatures series games were driven by detailed biological and neurological simulation and their unexpected results – basically a true form of artificial life.

The game was addictive and captivating and led me into tinkering with the game myself and creating additional objects for the game, and making them available online for free, for fun.  Creatures had a thriving online community and was probably one of the first gaming communities on the internet.  As my web site grew in popularity, I was asked by a couple of the guys working there to help them promote Creatures 2 and featured, alongside a couple of other community members, in a promotional video.  This also led me into being asked to become what the company described as a “1.5 party developer”…  Basically this meant I would have access to their development tools to create some add-ons for Creatures 2 (and, later, Creatures 3) and the developer (known as Cyberlife, then Creatures Labs, then Gameware) would sell it on our behalf.  Myself and Rich created Montu, an alternative world for Creatures 2 and probably, still, the biggest add-on created for the Creatures series.

Doing this taught me how to code.  Later on, when at university, I build a completely new game, called Melloweh, using the Creatures 3 engine…  It got nominated for a couple of awards at uni too, and scored me a place on a design challenge, which then led to employment, when I finished university, at Electronic Blackboard making educational software.  It also led me into programming in general, which led me into phone gaming, which led me into Timedancer and all the other projects that Chaos Created is now working on.

The guy behind this game series, Steve Grand, is a genius and he continued to work on artificial life, building a robot called Lucy.  When I was at university, on my Time Based Media degree, he was kind enough to agree to being interviewed as part of a documentary module.

Today, he lives in the US and is currently working on a new game, with advanced artificial life.  Norns, in Creatures, had drives and would make decisions based on what they “learnt” in their world.  Steve’s new project will incorporate a more realistic 3D world, with physics, and more advanced creatures that Steve believes will be capable of thought… To have dreams.

Anyway, Steve’s currently raising funds on Kickstarter and I want to spread the word about his project.  Please check out his page, and maybe donate a few quid if you can.  Steve’s a great guy and it’s his work – in a direct and in a round-about way – that led me to doing the work I do now.  I’m looking forward to seeing what he comes up with and developing some add-ons for his game once it’s released.