The night before Episode 2… How we got to now…

By Ali Maggs – Co-creator and Programmer 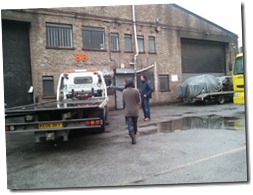 So, tomorrow morning, at 8am, we begin shooting the video elements for Timedancer Episode 2.

It’s been an exciting few months for us. Back in October of last year, we released Episode 1 and it’s been great for us to watch the Windows Phone platform grow and mature, and also see some excitement around our project and receive some positive feedback. We’ve been planning Episode 2 since then, and we’re ready to get stuck into it now, and also release future episodes in a more timely manner.

Episode 1 was a great teaser for the overall story. It introduced all of the major players in the Timedancer universe. Episode 2 starts the tradition of focussing on one of those characters (in this case, Adam, and Arivind has blogged more about that here), or one of the important relationships, and allowing the user to go deeper into exploring that character whilst driving the story further.

I arrived in London yesterday morning, and it’s been a busy 40-something hours, most of which has been spent driving a white van around London, transporting equipment, making some final plans around the sets we’re using and finalising shoot details. I use the term “driving” loosely – most of that time has been spent sat in traffic listening to XFM.

Today, myself and Arivind, the co-creator and writer, met up with Matt (our producer) and Mazin (who is directing Episode 2) to go over final details, test some of the equipment and, as of right now (11pm), we’re actually prepared and almost (dangerously) relaxed.

It’s not been without its trials and tribulations, however. Thursday night, we lost one of our key locations, so it’s been a bit of a challenge to workaround what was actually an amazing set. We had locked down a massive abandoned warehouse which was to serve as the location for some early time travel tests, and it had this amazing “blast” room in the middle of it. Sadly, the location became unavailable to us. So we’ve had to get creative over the last 24 hours, but we’ve come up with something quite exciting in a new space. It means we’ll be spending some time tomorrow set dressing, but it’s all part of the fun. Myself, Arivind and Mazin have been working on that today.

I’ll blog some more tomorrow night, after our first day shooting. Needless to say, we’re all very excited. There’s a bigger crew, and a bigger budget, and we’re looking forward to continuing what we started with Episode 1.

Over the next few weeks, we’ll be making some exciting announcements around Timedancer (including some announcements about where you can see Episode 2 first), and posting some behind-the-scenes material.