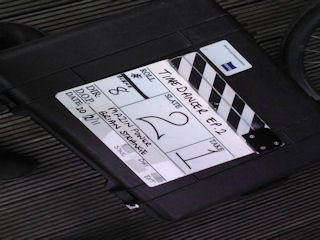 By Ali Maggs – Co-creator and Programmer

And that’s a wrap. For tonight… We get to do it all over again in nine hours from now but for now, at least, I can chill out. Or, better yet, sleep.

After loosing one of our key locations Thursday night (see last night’s blog post), the main task of the day for us involved transforming an industrial lift into a time travel test room, complete with an on-looking laboratory. Somehow, we managed to pull it off in a massive group effort from myself, Arivind, Matt (our producer) and Dave (our special effects guy). It wasn’t the location we initially wanted, but I think it’s forced us to be creative and the scene now has a really nice look and feel to it… I’m happy.

The shoot started slightly later than we planned as we were missing some equipment and our director and DOP had to adapt the equipment for our new set, but the guys clawed back some time and we ran pretty much to schedule which was amazing considering how much we had to fit in on one day.

The entire cast and crew were amazing. I normally tend to avoid the actual shoot of a production, normally because I’m typically involved with post-production and I like to approach the work with fresh eyes, but functioning as a “show runner” on Timedancer has allowed me to be a lot more hands on as it’s up to myself and Arivind to see this thing through from start to finish so we can bring out an app that is unique and is exactly what we want it to be. Plus, with both of us on set, we can bounce ideas off each other and either try them out, or bank those ideas for future episodes.

Mazin, our director, and his DOP Brian Strange, were both incredible. Mazin has a really good rapport with the actors and knows how to bring out the best performances, whilst Brian’s technical knowledge means we get a decent shot. Those guys were incredible, and adapted to our change of set well. Dave Brain, our special effects guy, made the long trip down from Bristol for the day to advise on our special effects shots, so this thing should move through post-production smoothly enough. Matt, our producer, has been great too, and he’s dealt with all the crazy shit that’s been thrown his way over the past few weeks, and today was a lot of fun seeing it all coming together.

So tomorrow’s locations involve a bar, a cemetery and a medical facility, so it’s another packed day, but today’s got me really excited about what we’re doing and it’s great to see the scripts coming to life. The scenes we shot today are more involving and emotional than episode one and the scripts, coupled with some great acting and direction, will allow players to really get to know the characters and experience the genesis of the timedancers and the Timedancer Corporation in episode two. 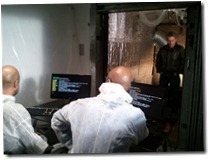 Or, check out the #Timedancer hashtag or, of course, we’re on Facebook too!