Much of the work we do requires people being able to work remotely, communicate and collaborate on ideas.

Working remotely has always been a pretty messy affair.

In our work with i-board, and educational software company, we’re constantly bouncing files back and forth, commenting on bugs, suggesting ideas and going live with versions.  The team, at the time, was around four people, and it’s now around nine or ten.

Back when it was just four of us, I was appointed “librarian” to simply try and version control all the games and activities we have (which is more than 400 activities).  This is going back two or three years now.

Back then, the only really neat online service was Google Documents, which was great for sharing to-do lists and lists of games, and organising schedules, but that was about it.  So, I set up an FTP folder on a server and began organising the library.  But FTP isn’t the most attractive solution. For example, it’s not great at having a “history” – so nobody’s aware of what was uploaded when, and the feedback remained in a back-and-forth bounce of emails.

Anyway, there’s now a more attractive solution.  We’ve started using Windows Live Groups as a way to work, and it’s been great.  Here’s how we’ve been using the service so far.

Everybody has their own Windows Live ID which can either be a Hotmail/Live email address, or thankfully, you can use your own address (either by simply using your own address, or using their custom domains service).  I say, thankfully, because there are still a bunch of online services that force you into using their email services (I’m looking at you Yahoo/Flickr, and you Google Buzz) which is crazy – who wants to have a different email account for each online service?

Probably the most under-rated service for me, Windows Live Groups was such a success for me on a project that I’ve been working on (with three colleagues in Wales, one in France, and another in China), that I adopted the system for my i-board work, and for our app work (A separate group for each team). 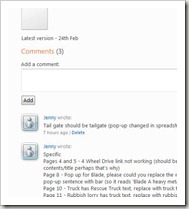 SkyDrive is the online file store integrated into Windows Live Groups.  It’s smart in a few ways…  Firstly, it maintains a version feed on the What’s New Feed so you can have multiple versions and always know which is the latest file.  Secondly, it allows the “uploader” to write a title and description (useful when the filename isn’t entirely descriptive, and you can describe the changes in the latest version).  Thirdly, it allows other group members to comment on each file.  It’s great!  A fantastic way to list bugs and offer suggestions.  There’s a couple of other useful features in there, including a way to download the contents of the folder as a zip – handy when you’ve got 500 sound files in one folder to use as a resource. 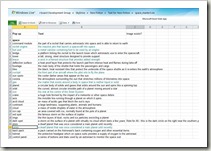 Windows Live Docs is a new service, and therefore not everybody has it yet, but it integrates into the Group and also into the Office 2010 beta allowing you to save Office Documents straight to the group.  It’s as good as Google’s popular documents service (and is far more compatible with Office than Google’s downloadable versions).  It’s not tremendously better than Google Docs, but it is “as good”, and again it adds to the “What’s New Feed” so you can see what’s been added/removed (and you can have more than one user working on a document at any one time).

The What’s New Feed is fantastic.  Being able to see what team members are uploading what, and where to is valuable. And it provides a link straight to that file.  It’s insanely good.

For me, my preference on conferencing is Windows Live Messenger, simply because of it’s integration into the other Windows Live services (for example, I can see new documents being uploaded in real time on the “What’s New” panel and it lets me communicate with my Windows Live Group in real time).

The downside is that the Mac client is still pretty appalling and doesn’t feature nearly as many features as the Windows version (for example, video conferencing is not available).  Hopefully there’ll be a Mac refresh at some point, with groups included.

So, for now, Skype’s still the main way to video conference, at least between myself and Arivind Abraham, who I work with considerably.  However, between other PC users, being able to set up a group, and have that integrated into an IM client as well as a web-based file share, is more valuable than I realised.

So, that’s a little bit about how we manage working remotely.  For us, it’s the most attractive solution.  Sure, Google’s Wave is interesting, but it’s more style over substance and the “What’s New” feed on Windows Live Groups accomplishes much of what we need, with less confusion.