It’s been a very busy few months here at Chaos Created.  Most of our work has been focussed on a couple of unannounced projects (more on that soon) and finishing up editing on horror thriller movie, 5:13, and the other movie, The Joshua Tapes.

Both films are slated for release early 2010, and Chaos Created has been responsible for post production (editing and sound design).

Here’s the official poster, designed by Luke Yerbury, with photography from Matthew Ong 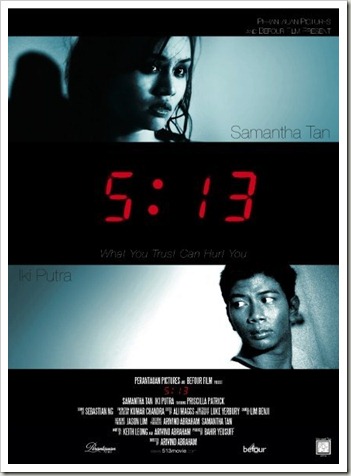 The official web site will be launching soon.  We’re just waiting on approval of the trailer, and we’ll be good to go.

We’re also using Microsoft Tag to distribute out mobile content, including mobile trailers and downloads.  It’s a fantastic bit of technology that allows users to ‘snap’ the tag using their mobile phone (actually, on most devices, you don’t even need to snap, the moment the application sees a tag, it’ll send users on their way to the content), and automatically be redirected to our mobile content (dynamically).  Not only does it work on most phones (pretty much any phone that can accept applications and has a browser – i.e. nearly all new phones) but the responsiveness is amazing…  Out of focus, no problem…  Too close/too far? No problem.

Tags can tie into mapping services, video, web sites, or simply pop up a message.

We’re even now beginning to think of ways we could use tags…  Take a look at one of our past projects, Gridsearch.  This is an area in which Tags would be very useful.

Take a look at http://www.microsoft.com/tag for more information on the technology.