The Beginning Of The End – Finishing The Joshua Tapes 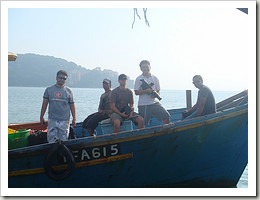 Ok, the title of the post sounds a little daunting, but after a long slog of several months of late nights and work-filled-weekends, The Joshua Tapes is nearly done.

Last year, Perantauan Pictures, with Befour, filmed two feature-length movies back-to-back.  The first, 5:13, is a horror film and the second film, The Joshua Tapes is a drama/comedy/road trip film (I find it hard to describe it more concisely than that).

Due to the scheduling, The Joshua Tapes needed to be the first completed so, I ditched (for now) the editing on 5:13 in order to complete TJT.

The movie, shot in HD, was edited entirely in Sony Vegas Pro which has been a joy to work with.  I say that having had so many issues with other editing suites when I started on 5:13, also an HD film (Heck, Premiere lost me three weeks of work…).  Vegas has literally let me edit in HD, in full resolution or close to it, with real time previews.  It’s been great.  No rendering of clips in between previews, and no reduced-resolution clips on my timeline and output monitor.  I’m also running Windows 7 (beta, of course) which literally flies on this system (which has a nice 4GB of RAM), and a dual monitor set-up too. 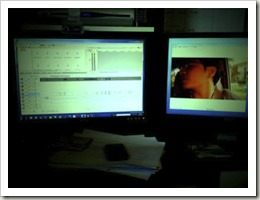 The only draw back (with Vegas) has been that the film has had to be split down into four chunks (as it seems to become a little wobbly when you get past the 1GB memory usage) but, to be honest, it’s made the whole project more manageable as we’ve been able to concentrate tasks on a specific quarter per day/weekend, deepening on the task in hand.

The edit itself has been fairly smooth.  There were a few issues with missing clips during the shoot, but the assembly cut, otherwise, was fairly straight forward.

I prefer, when the audio is recorded separately, as was the case here (as opposed to recording to the camera) to do the picture edit first, and then do a second run through syncing all the sound.  So my assembly cut used the camera sound.

My second loop around, assembling the sound, was where things got a little trickier.  A huge amount of the film was set in a car.  The problem is that the car chosen (A Pajero) is the nosiest beast you could imagine – and I mean, the living room, two floors beneath my office, literally shakes when the volumes turned up, and it couldn’t be towed for a couple of reasons, mainly due to the costs incurred in Malaysia where the movie was shot.  The sound, in itself, isn’t a huge deal as you play through one take, and one angle, but it became suddenly very jarring as we cut between the actors in the same scene, as gears change and engine noises altered.

Anyway, it became a point of altering the audio in each shot, and we got around it the best we could by merging the audio into one file the best I could, using cross fades in the sound, and picking opportune moments to switch between tracks.  Then in was a case of externally filtering the audio to produce three tracks.  One, just base, to give a constant engine rumbling, the original file altered if necessary, and a track with as much bass as possible removed.  Then, it’s back to Vegas to play with the levels some more.

Am I happy with it?  I think that it’s something I’m pedantic about and still a bit shaky on, but it’s not as noticeable when played out on a TV in 5.1, and maybe I’m only noticing it because I’m aware of what the problems are…  I think it would have been easier if The Joshua Tapes was about three guys on a bicycle ride, but I’ll learn to live with it. 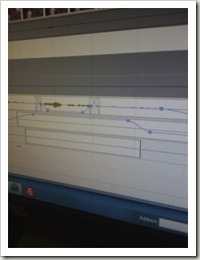 Being HD, it’s taken 2 days to render the whole film out, and it’s off to the director, Arivind Abraham, tonight for him to pick through and highlight any glaring errors or omissions.  I’m pretty confident in the cut we have as Arivind’s been here most weekends, overseeing the process, which has been useful, obviously to get his take on the film, but also to stop me from going crazy with cabin fever.  Which happened anyway.

Then, if we’re happy, the render’s on it’s way, later this week, to Luke Yerbury for colour treatment.

And the verdict on the film itself.  After, I suppose, 5 months worth of work, I can still sit back and enjoy the movie.  Sure, there’s scenes I’ve seen a thousand times, and there’s lines I can’t possibly stand to hear again because they’ve given me so much bother, but at the end of the day, it’s a great film.  Sweet, smart and well paced.

I’m looking forward to everyone being able to see it soon.

I’ll blog a little more about some specifics of the process once I’ve had a couple of days to recover.