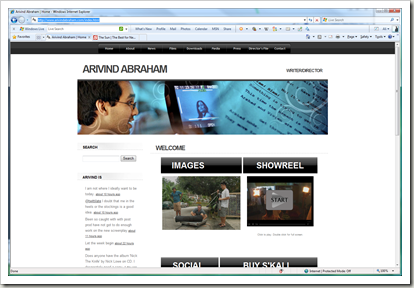 Another of our web projects went live over the weekend.

ArivindAbraham.com is the home to, funnily enough, Arivind Abraham – a writer and director, based in London.  He’s actually the writer/director for the two film projects I’m currently editing on though Chaos Created/Befour, 5:13 and The Joshua Tapes.

The web site, itself, was a bit of a challenge and we’ve incorporated Flash and Silverlight (tied together with a bit of JavaScript) to deliver trailers and film content in high definition.  And we’ve made the most of social networking, bringing together a blog, Twitter, Linked In, Flickr, Windows Live, Friendfeed and 12 Seconds to make the most of social networking. We’ll be adding to these in the coming months, to build a bit of a community, and we’ll pick up some traction as we go into marketing the forthcoming movies too.

Anyway, be sure to check it out.  There’s also a lot of content on there, particularly on the Blog, as to the work that’s progressing on both 5:13 and The Joshua Tapes.