Finally, those chickens are getting some recognition! 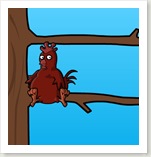 I was playing on the iboard site tonight and came across this brilliant activity in the maths trial Pack. First of all the name appealed, but then came the visuals. Picture three chickens, a stack of weights and a catapult! What to do? What to do? A serious Homer Moment arose, but with an inevitable outcome. As I expect any self respecting student would do, I put as many weights as possible on the trap door, loosed these on the catapult and then sat back as each chicken was thrust skyward beyond their roosts before, slowly drifting back to mother earth assisted by a parachute.

Putting aside for a moment the humour and obvious fun I had, my initial free and semi structured play engaged me in a series of trial and refinement processes, as I visually evaluated the effect that the simulated masses had on the catapult and its ability to raise the chickens to their roosts. Further play and I found myself estimating what masses would be needed to lift each.

Perhaps I am only 7 at heart rather than a multiple of… but I loved it!

This is still one of my favourite i-board activities I’ve developed (not including the Big Day Out stuff I’m working on at the moment) – Sara and I had great fun with this one (and the Woodlands Disco and Dance Moves of course!).