More of a heads up than a grand announcement, but we’re cracking on with two new products at the moment of our own.  The first is Melloweh which has been in stasis for a little while and in some form of development since 2004. 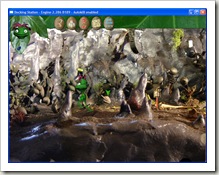 Melloweh actually won a runner up prize for multimedia, awarded by HP, back in 2005 for its demo.  The original demo was built using the Creatures Evolution Engine, developed by Creature Labs/Gameware and combined an artificial life game with a narrative and level based play.  I’ll get around to posting the development diaries for the demo in good time, but one of the most interesting aspects was that we actually built the models for the world (constructed by Carla, who is now working as a set designer on film and television) in which the creatures, a  bug species, lived.  We then photographed them and combined them with some CG elements (including the creatures themselves).  The idea was interesting, and worked well.  Steve Grand and Ian Saunter did the same for the original Creatures game, for anybody here that played those games.

Since then, up until early 2008, the project was pretty much on hold (aside from the occasional dabble) as we’ve been busy working on other things, but we’ve got going again on the project recently (and made contact with those responsible for the original demo).

The second game (which may actually arrive slightly earlier than Melloweh, and is actually less of a game) will be a spin off, using the same technology, but aimed at a different audience and I’ll post more on this soon.

We’re using a different "engine" this time around (which is more flexible for us, and also extends the capabilities as to what we can do), so there’s been a bit of a "from scratch" element to it, but it’s coming along nicely, and we’ll be ready for a release later this year on both products.

The idea being that the development for both products will be treated as one product for the next few months, and then they will spin off in different directions once the framework and AI is complete as both projects are very closely linked.

But for those that are interested, there is still an AL (artificial life) element to it.  In fact, the last few months have been spent working on the ‘brain’ and the results are pretty impressive so far.  And we’ve started knocking about some of the internet aspects of the game too.

The art will come later on.  At the minute, the graphics are all placeholders (in fact, for the most part, we’re using the original model photographs and graphics from the demo as those placeholders).

Anyway, there will be more information to follow.  Obviously, there’s not much to give away at the moment as most of the work, to date, has been on the back-end stuff, but I’ll blog about the "brain" and the guts of the games shortly.